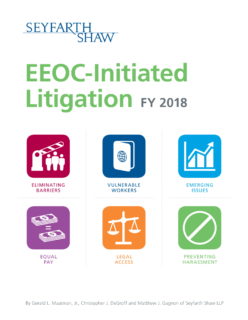 Seyfarth Synopsis: We are once again pleased to offer our readers an analysis of the five most intriguing developments in EEOC litigation in 2018, in addition to a pre-publication preview of our annual report on developments and trends in EEOC-initiated litigation. This year’s book, entitled EEOC-Initiated Litigation: FY 2018, provides a comprehensive examination of the EEOC’s FY 2018 filings, and the major decisions handed down this year in pending EEOC litigation.

Each year, we conduct a thorough analysis of new lawsuits filed by the EEOC and major case decisions handed down by courts across the country in EEOC litigation. Our goal is to identify key trends regarding new areas of focus for the EEOC and significant procedural or substantive developments in EEOC litigation. We package those trends and developments into one comprehensive volume, EEOC-Initiated Litigation: FY 2018, which we provide to our clients so they can use that information in structuring their compliance programs and to avoid becoming a target of the EEOC’s enforcement agenda. Our annual report is targeted towards HR professionals, corporate counsel, and other corporate decision-makers.

This year, we have analyzed trends and developments in light of the strategic priorities identified by the EEOC itself in its Strategic Enforcement Plan. Over the years, we have consistently found that those strategic priorities guide the EEOC’s actual enforcement agenda. How the EEOC has interpreted and defined its agenda in light of those priorities is one of the key insights that we hope to provide in our annual report.

A pair of cases decided under the ADA brought some interesting insight into the relative advantages and disadvantages the EEOC enjoys at the pleading stage.

In EEOC v. UPS Ground Freight, Inc., the EEOC took the unusual and aggressive step of arguing, in a motion for judgment on the pleadings, that the language of a collective bargaining agreement established a prima facie case of a discriminatory policy under the ADA because it paid drivers disqualified for medical reasons less than what it paid drivers disqualified for non-medical reasons. The Court granted the EEOC’s motion, and issued a permanent injunction against the company, holding that the agreement’s language was plain and unambiguous, and that no case-by-case analysis was required because the language itself was enough to establish that unlawful discrimination was part of the employer’s “standard operating procedure.” This decision is remarkable for a number of reasons, but perhaps most especially because of the EEOC’s unusually aggressive – and successful – tactic to establish a prima facie case of liability at the very outset of the case. Employers should be wary of the EEOC using this tactic in future cases.

In EEOC v. Prestige Care, Inc., however, the EEOC did not fare so well.  The EEOC sued Prestige Care on behalf of 13 identified claimants for violations of the ADA, arguing that the employer followed policies that did not permit reasonable accommodations for qualified individuals. In a motion to dismiss, the employer argued that the EEOC’s complaint was deficient as to ten of the 13 claimants because it failed to allege they had impairments that affected a major life activity, or failed to identify essential job functions, and therefore had not alleged that they had plausible ADA claims. The EEOC argued that it was not required to do so because it has the unique and broad authority to bring lawsuits in its own name on behalf of a group of unnamed individuals. The Court disagreed, holding that the EEOC is not immune to normal pleading requirements. When the EEOC identifies additional victims who have allegedly suffered disability discrimination, it must plausibly allege that those individuals are protected by the ADA. In other words, despite the often lopsided relationship between employers and the agency during the investigative stage, the parties are on equal footing in the court system.

Intriguing Developments 3 and 4: LGBT Discrimination, The Debate Rages On

Will the Supreme Court step in? With the federal circuits divided on this issue, not to mention the vastly divergent interpretations of Title VII by the agencies entrusted to enforce Title VII, many observers considered this issue ripe for review by the U.S. Supreme Court. And, in fact, the Supreme Court had set a date in November of 2018 to decide whether to grant review of three cases, including Zarda, which had addressed this issue. In November of 2018, the Supreme Court delayed consideration of that issue and then, abruptly, removed it from its calendar altogether. The original date had been set in September of 2018, before the bruising confirmation fight over Justice Kavanaugh. Some have speculated that this is evidence that the Supreme Court is trying to avoid controversial cultural issues during Kavanaugh’s first term to allow time for the dust to settle from his confirmation battle. In the meantime, employers are forced to contend with a confusing patchwork of interpretations regarding the scope of Title VII that can vary from Circuit to Circuit, and from District to District.

Our last pick as a top 5 development of the year is actually an aggregation of the dozens of cases the EEOC filed alleging sexual harassment. As we previously reported here, one of the most striking trends of FY 2018 has been the huge spike in sex-based discrimination filings, especially those alleging sexual harassment. Lest there be any doubt as to whether this represents a significant shift in priorities, on October 4, 2018, just four days after the end of the EEOC’s 2018 fiscal year, the agency took the unusual step of announcing its preliminary FY 2018 sexual harassment data. Employers usually must wait until the EEOC releases its Performance and Accountability Report in mid-November to see that kind of data. The EEOC trumpeted filing 66 harassment lawsuits in FY 2018, 50% more than FY 2017. Given the intense focus on this issue, we strongly suspect that this trend is here to stay for the foreseeable future.

Despite predictions to the contrary, the EEOC has continued its “business as usual” aggressive litigation despite two years under the Trump administration. Changes are, however, afoot. The Senate has still not confirmed two Trump-nominated Republican Commissioners, including one who is set to become Chair of the Commission, or Trump’s pick to be the EEOC’s General Counsel. (One of those nominated to be a Commissioner, Daniel Gade, recently withdrew from consideration on December 21, 2018, citing the delays in the nomination process as the reason.) Eventually, the impact of the injection of new decision makers will be felt, perhaps dramatically. That makes it especially important for employers to monitor these developments in 2019. Of course, we will have our ear to the ground, and look forward to sharing our thoughts and prognostications with our readers throughout the new year!